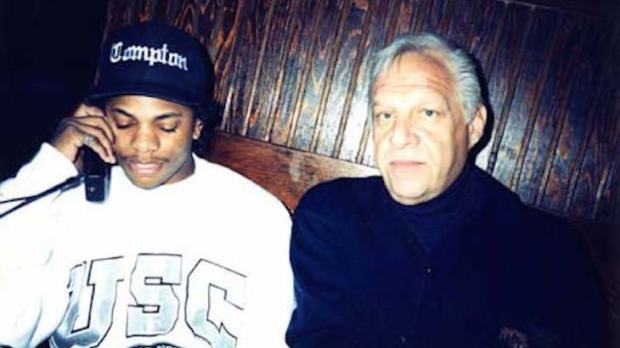 I woke up Saturday morning and was saddened by the sudden passing of Music Mogul Jerry Heller. A serious deal maker and a powerhouse figure in the music industry,but sadly he’ll only be remembered as the guy who caused the unfortunate breakup of the world’s most dangerous group “NWA”. But Jerry’s resume goes way back further than “Eazy does it” & “Straight Outta Compton” he also managed acts like Ike & Tina Turner, Marvin Gaye, War, Otis Redding and Black Sabbath just to name a few. Eazy E went through great lengths to convince Jerry to help him with his music. And when Jerry finally came realized what he had, he opened the flood gates and helped usher in a new sound of Hiphop. “Gangsta Rap” It was new, fresh, edgy, hardcore. Since Eazy E is the Godfather of Gangsta Rap, then Jerry is the patriarch because while Dr. Dre and Eazy  was fighting to get that sound heard Jerry was fighting to  get that sound in the right hands. While Dre had the magic touch with the production, Jerry had the magic wand with the distribution system. He was just as important to the west coast movement as the artists who wrote the lyrics. Jerry was just as important on the business side of the industry as Eazy was on the hustling side of the music. Although things went sour between Jerry and NWA in the end, hopefully they’ll at least acknowledge the fact he provided the platform for them ply their trade and get the exposure they needed in which they reaped the benefits of in the long run. Me personally I’m going to miss his intelligent interviews, his insight on the business and his drive to try new things keep the entrepreneurial spirit alive way after his exit from the Music industry so here’s to you Jerry rest easy.