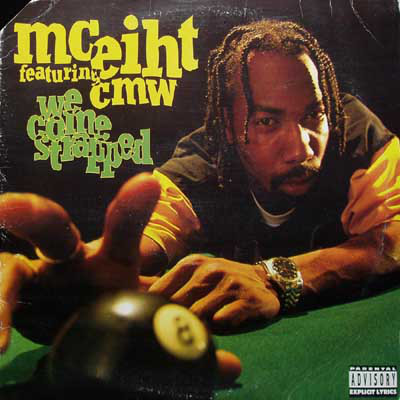 Turn off your iPods and MP3 Players and stroll down memory lane with me for a minute. The year is Summer ’94 when the Compton O.G. MC Eiht dropped this street gem “We Come Strapped”. It was perfect timing because Eiht had just come fresh off a successful run with his hit single “Straight Up menace” which was the highlighted song on the classic “Menace 2 Society” soundtrack. So it was natural us Hiphop was waiting, wondering when was he coming out with an album. It was worth the wait and Eihthype did not disappoint, the production value alone was worth buying this album over and over again. I love how he and DJ Slip played with the bassline throughout the album every song had a different bass tune that made you thank the man upstairs for installing those twelves and fifteens in your trunk. “Niggaz that kill endolude”  set the tone for the album, but I was geeked when I found out the “Def Wish3” intro was sampled from the “Deep Cover” movie and “Def Wish3” although it was a diss song to DJ Quik who he was rivaling with at the time (they’ve settled their differences since then) this cut featured vocals from Carla Evans who put some soul into this gangsta azz song, it would’ve been nice if Eiht would’ve let her do a solo on this album. “All For The Money” which was the single sampled the soulful beat from “In The Mood” by the late great Tyrone Davis, it was after hearing  this I started listening to him. Although MC Eiht didn’t have witty punchlines in his rhymes, what he rapped about was all that mattered “Take 2 With Me”, “Niggaz Make The Hood Go Round”, “We Come Strapped”, “Going Out Like Geez” & “Nothing But A Gangsta” was the only cut to featured the Emcees Spice 1 & Redman. That was those gritty hood tales we loved hearing about, the very substance that is missing in today’s hiphop. But While he had all these trunkbangers he had smooth cuts like”Can I Still Kill It”, “Compton Bomb”, “Hardtimes” & “2 Tha  Westside” that was real easy on the ears, these four cuts are so smooth and laid back they could’ve been reused as R&B beats. But what really stoodout on this album was the use of live instruments. I love the sounds of the Bass, Piano, Flute. It’s so soothing when you add live instruments, it brings out a certain sexiness in the songs that can’t be matched buy protools or any other digital format. Which is why this album is easily gained a top 5 spot of my top 10 favorite Westcoast hiphop albums. I smoked a lot of Cigars and drunk plenty of Cognac while listening to this amazing Hiphop Masterpiece from July 19, 1994 it’s original release date to 2017, it aged well and it still get regular spins in my deck. Digital downloads don’t do this album justice, if you’re an old skool hiphop head and you have this laying around on tape or CD, I suggest you pull out that cassette or CD walkman wipe the dust off, put in some fresh batteries, put your headphones on and let it play and take it all in like it’s 1994 Geeeaaaaaaah.